An extension to the 'testthat' package that makes it easy to add graphical unit tests. It provides a Shiny application to manage the test cases.

vdiffr is an extension to the package testthat that makes it easy to test for visual regressions. It provides a Shiny app to manage failed tests and visually compare a graphic to its expected output.

Important: The CRAN version no longer works properly. Please use the development version which removes the dependency on the system FreeType library.

Get the development version from github with:

or the last CRAN release with:

Getting started with vdiffr is a three step process:

When a figure doesn't matched the saved version, vdiffr signals a failure when it is run interactively, or when it is run on Travis or Appveyor. Mismatches do not cause R CMD check to fail on CRAN machines. See the testing versus monitoring section below.

vdiffr integrates with testthat through the expect_doppelganger() expectation. It takes as arguments:

Note that in addition to automatic ggtitles, ggplot2 figures are assigned the minimalistic theme theme_test() (unless they already have been assigned a theme).

When you have added new test cases or detected regressions, you can manage those from the R command line with the functions collect_cases(), validate_cases(), and delete_orphaned_cases(). However it's easier to run the shiny application manage_cases(). With this app you can:

Both manage_cases() and collect_cases() take package as first argument, the path to your package sources. This argument has exactly the same semantics as in devtools. You can use vdiffr tools the same way as you would use devtools::check(), for example. The default is ".", meaning that the package is expected to be found in the current folder.

All validated cases are stored in tests/figs/. This folder may be handy to showcase the different graphs offered in your package. You can also keep track of how your plots change as you tweak their layout and add features by checking the history on Github.

You can run the tests the usual way, for example with devtools::test(). New cases for which you just wrote an expectation will be skipped. Failed tests will show as an error.

When a figure doesn't match its saved version, it is only reported as a failure under these circumstances:

Otherwise, the failure is ignored. The motivation for this is that vdiffr is a monitoring tool and shouldn't cause R CMD check failures on the CRAN machines.

Checking the appearance of a figure is inherently fragile. It is a bit like testing for errors by matching exact error messages. These messages are susceptible to change at any time. Similarly, the appearance of plots depends on a lot of upstream code, such as the way margins and spacing are computed. vdiffr uses a special ggplot2 theme that should change very rarely, but there are just too many upstream factors that could cause breakages. For this reason, figure mismatches are not necessarily representative of actual failures.

Visual testing is not an alternative to writing unit tests for the internal data transformations performed during the creation of your figure. It is more of a monitoring tool that allows you to quickly check how the appearance of your figures changes over time, and to manually assess whether changes reflect actual problems in your packages.

If you want vdiffr to fail on CRAN machines as well, just set the environment variable CI to "true" in a setup-vdiffr.R file in your testthat folder.

An addin to launch manage_cases() is provided with vdiffr. Use the addin menu to launch the Shiny app in an RStudio dialog. 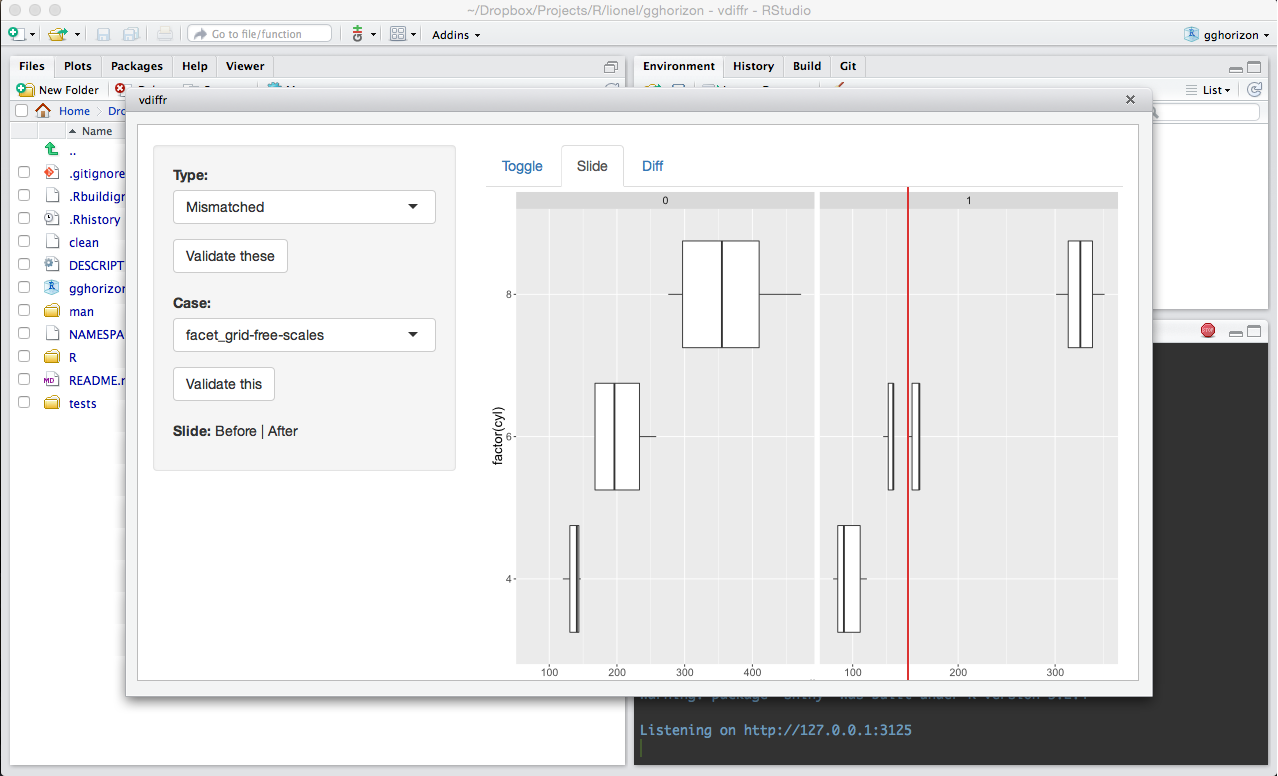 To use the Shiny app as part of ESS devtools integration with C-c C-w C-v, include something like this in your init file:

It is sometimes difficult to understand the cause of a failure. This usually indicates that the plot is not created deterministically. Potential culprits are:

To help you understand the causes of a failure, vdiffr automatically logs the SVG diff of all failures when run under R CMD check. The log is located in tests/vdiffr.Rout.fail and should be displayed on Travis.

You can also set the VDIFFR_LOG_PATH environment variable with Sys.setenv() to unconditionally (also interactively) log failures in the file pointed by the variable.

vdiffr extends testthat through a custom Reporter. Reporters are classes (R6 classes in recent versions of testthat) whose instances collect cases and output a summary of the tests. While reporters are usually meant to provide output for the end user, you can also use them in functions to interact with testthat.

vdiffr has a special reporter that does nothing but activate a collecter for the visual test cases. collect_cases() calls devtools::test() with this reporter. When expect_doppelganger() is called, it first checks whether the case is new or failed. If that's the case, and if it finds that vdiffr's collecter is active, it calls the collecter, which in turns records the current test case.

This enables the user to run the tests with the usual development tools and get feedback in the form of skipped or failed cases. On the other hand, when vdiffr's tools are called, we collect information about the tests of interest and wrap them in a data structure.

Comparing SVG files is convenient and should work correctly in most situations. However, SVG is not suitable for tracking really subtle changes and regressions. See vdiffr's issue #1 for a discussion on this. vdiffr may gain additional comparison backends in the future to make the tests more stringent.

This release of vdiffr features a major overhaul of the internals to make the package more robust.

While this makes vdiffr much more robust, it also means you will have to regenerate all your testcases with the new version of vdiffr. You can expect very few future releases that will require updating figures, hopefully once every few years.

Now that vdiffr has a stable engine, the next release will focus on improving the Shiny UI.

Another important change is that figure mismatches are no longer reported as failures, except when the tests are run locally, on Travis, Appveyor, or any environment where the Sys.getenv("CI") or Sys.getenv("NOT_CRAN") variables are set. Because vdiffr is more of a monitoring than a unit testing tool, it shouldn't cause R CMD check failures on the CRAN machines.

Despite our efforts to make vdiffr robust and reliable across platforms, checking the appearance of a figure is still inherently fragile. It is similar to testing for errors by matching exact error messages: these messages are susceptible to change at any time. Similarly, the appearance of plots depends on a lot of upstream code, such as the way margins and spacing are computed. vdiffr uses a special ggplot2 theme that should change very rarely, but there are just too many upstream factors that could cause breakages. For this reason, figure mismatches are not necessarily representative of actual failures.

Visual testing is not an alternative to writing unit tests for the internal data transformations performed during the creation of your figure. It is more of a monitoring tool that allows you to quickly check how the appearance of your figures changes over time, and to manually assess whether changes reflect actual problems in your package.

If you need to override the default vdiffr behaviour on CRAN (not recommended) or Travis (for example to run the tests in a particular builds but not others), set the VDIFFR_RUN_TESTS environment variable to "true" or "false".

This release fixes some CRAN failures.

This release makes it easier to debug failures on remote systems. It also makes vdiffr more robust to failures caused by incompatible installations: instead of failing, the tests are skipped. This prevents spurious failures on CRAN.

The tests are now skipped if the FreeType version used to build the comparison SVGs does not match the version installed on the system where the tests are run. This is necessary because changes in new version of FreeType might affect the computation of text extents, which then causes svglite to produce slightly different SVGs. The minor version is not taken into account so FreeType 2.7.1 is deemed compatible with 2.7.2 but not with 2.8.0.

In practice, this means that package contributors should only validate visual cases if their FreeType version matches the one of the package maintainer. Also, the maintainer must update the version recorded in the package repository (in the file ./tests/figs/deps.txt) when FreeType has been updated on their system. Running vdiffr::validate_cases() updates the dependency file even if there are no visual case to update.

In the future, we may provide a version of vdiffr statically compiled with a specific version of FreeType to prevent these issues.

Report a bug at https://github.com/r-lib/vdiffr/issues