Plot model surfaces for a wide variety of models using partial dependence plots and other techniques. Also plot model residuals and other information on the model.

After building a regression or classification model, it's often useful to plot the model response as the predictors vary. These model surface plots are helpful for visualizing "black box" models.

The plotmo package makes it easy to generate model surfaces for a wide variety of R models, including rpart, gbm, earth, and many others.

Let's generate a randomForest model from the well-known ozone dataset. (We use a random forest for this example, but any model could be used.)

We now have a model, but what does it tell us about the relationship between ozone pollution (O3) and humidity and temperature? We can visualize this relationship with plotmo: 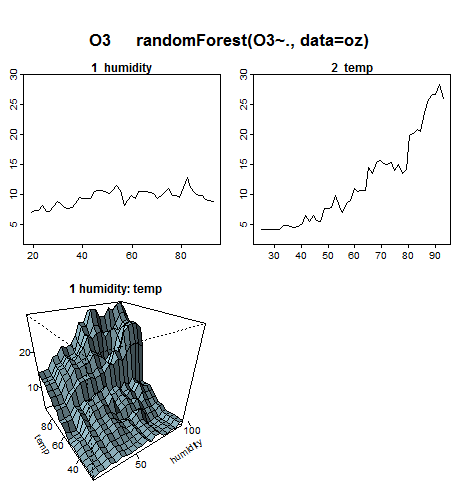 From the plots, we see that ozone increases with humidity and temperature, although humidity doesn't have much effect at low temperatures.

The top two plots in the above figure are generated by plotting the predicted response as a variable changes. Variables that don't appear in a plot are held fixed at their median values. Plotmo automatically creates a separate plot for each variable in the model.

The plotres function is also included in the plotmo package. This function shows residuals and other useful information about the model, if available. Using the above model as an example: 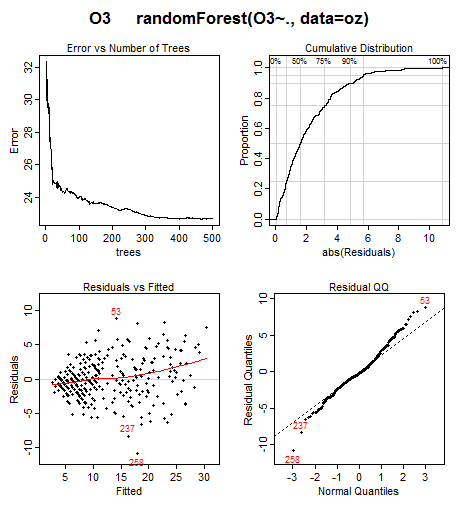 Note the "<" shape in the residuals plot in the lower left. This suggests that we should transform the response before building the model, maybe by taking the square or cube-root. Cases 53, 237, and 258 have the largest residuals and perhaps should be investigated. This kind of information is not obvious without plotting the residuals

More details and examples may be found in the package vignettes:

The package also provides a few utility functions such as plot_glmnet and plot_gbm. These functions enhance similar functions in the glmnet and gbm packages. Some examples: 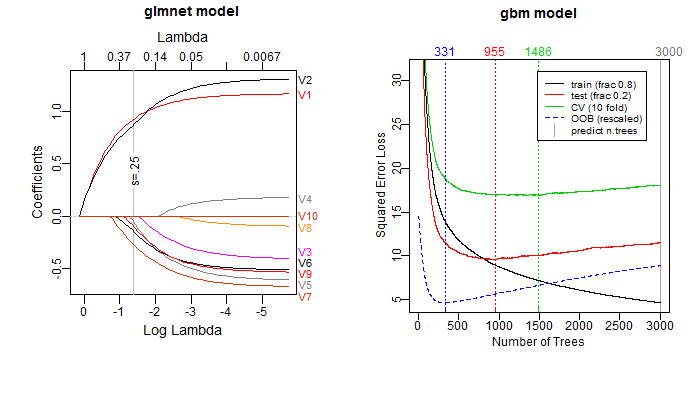 Which models work with plotmo?

Any model that conforms to standard S3 model guidelines will work with plotmo. Plotmo knows how to deal with logistic, classification, and multiple response models. It knows how to handle different type arguments to predict functions.

Package authors may want to look at Guidelines for S3 Regression Models. If plotmo or plotres doesn't work with your model, contact the plotmo package maintainer. Often a minor tweak to the model code is all that is needed.

Changes to the plotmo package

Extended plotmo to support earth version 5.0.0, which allows multiple responses using the Formula package. Plotmo now also has partial support for other models also created using Formula (as well as those that use formula). Added "Depends: Formula" to the DESCRIPTION.

If nresponse is not specified for multiple response models, plotmo now defaults to nresponse=1 with a warning (whereas previous versions of plotmo issued an error message).

Updates to the libraries shared with earth.

Improved support for models specified with a formula containing an offset term.

Can now plot multinomial models from the "pre" package.

Tweaked linmod.R to better handle models with all-zero residuals, and updated the documentation.

The default pegged value of background variables has changed in this version, but only for logical and factor variables. For these variables the value occurring most often in the training data is used as the background value. (In previous plotmo versions, the first level of factors was used. But the majority level seems more consistent with the median used for numerics. Also, in previous versions logicals and integers were sometimes incorrectly converted to numeric.) Note this change doesn't affect pmethod="partdep" and "apartdep", which continue to behave as in previous versions.

Added support for the partykit and evtree packages. Thanks to Achim Zeilis for his help.

Plotmo is now more intelligent about maximizing the number of degree2 plots in the 4x4 grid.

If plotting a probability and pt.col is specified, we now scale the response range to 0...1 so the points are displayed on the probability scale.

Fixed a minor bug in pmethod="partdep" which sometimes incorrectly caused an error message under certain conditions when there is only one predictor (added a missing drop=FALSE).

Enhanced support for the mlr package (but we can't support mlr objects properly until the call is saved with WrappedModels).

Enhanced support for the caret package (we now use get.singles and get.pairs on the submodel).

If predict.rpart is predicting a probability, plotmo now recognizes that and sets ylim=c(0,1) appropriately.

Plotting of intercept-only models was slightly inconsistent. Fixed that.

We now attempt to better set the default nticks in persp plots.

We now position the labels in persp plots slightly better along the axes (they were sometimes too far away from the front corner).

When degree2 is exactly two strings, we now assign the x1 and x2 axes in the order specified in degree2 (although persp plots still get rotated for optimum visibility of the surface, and this rotation can reverse the order of the axes).

If degree2 is exactly two strings, plotmo now prints just that degree2 plot e.g. degree2=c("wind", "humidity"). We plot the variable pair even that pair isn't used in the model (because we implicitly set all2=TRUE if degree2 is two strings).

For the qq plot in plotres, changed the diagonal qq line to dotted black. This gives more compatibility with plot.lm, and also means that the legend for the density subplot along the bottom of the qq plot (with info=TRUE) isn't mistakenly assumed to apply to the main plot. For the old behavior use qqline.col="gray", qqline.lty=1.

Added basic support for the "pre" package (using the importance function in that package).

Fixed minor bug: the plotmo grid wasn't printed if ylim was specified by the user.

The vignettes are now compressed with gs and qpdf as in tools::compactPDF, (but that happens outside the standard CRAN build system). It does mean that the tar.gz file for plotmo is a little smaller (now 1155 kByte).

Added support for package gam version 1.15 and higher (the S3 class of gam objects changed from "gam" to "Gam" to prevent clashes with the mgcv package). Plotmo now works with both the old and new versions of gam.

Error "glmnet.formula must be called with use.model.frame=TRUE" is now issued when necessary.

Support for the C50 package.

Better handling of NA and 0 colors in plot_glmnet.

Better messages to the user for models with too many variables to fit on a page.

When choosing which variables to plot for randomForest models, variable importance is now calculated using a more correct measure, viz. one of IncMSE or IncNodePurity (regression models), or MeanDecreaseAccuracy or MeanDecreaseGini (classifications models). The second option is used if importance=TRUE was used when building the model. Use trace=1 when calling plotmo to see which measure of importance is used.

The plot_gbm function now displays the gray vertical line at the correct position when n.trees is specified.

Extended the vignette with new chapters on partial dependence plots and classification models.

The title on persp plots is now better aligned to the degree plot titles. The margins for persp plots are now more optimal (they now give bigger plots when do.par=FALSE and there are also degree1 plots).

Fixed error message when plot_gbm was used on multinomial models. Fixed warnings in plot_gbm when gbm.ntrees is very small (less than 10).

The functions plot_gbm and plot_glmnet are now exported and available for the user. These functions have been enhanced for this version.

Improved support for gbm and glmnet and related models.

We now print "plotmo grid:" instead of just "grid:" for context when it's printed from within a body of code.

Changed default colors in plot.glmnetx. The colors stay in the order they are passed to plot.glmnetx as we move down the rhs of the plot.

Added support for the adabag package.

Documentation updates. Thanks to Achim Zeileis for his feedback.

Added plotmo.prolog.cv.glmnet (to handle missing "call" in cv.glmnet objects). More work on the issue where vars on the rhs of formula are multidimensional. Documentation updates.

Removed references to functions in old versions of earth.

Simplified the way xlim and ylim are calculated internally.

Simplified the way jitter is handled.

If type="probability" or similar, and the response has two columns, nresponse now automatically defaults to column 2.

We now find the data argument for formula models even if the argument is unnamed.

Reworked the internal functions that get the data from the model.

If pch.response has type character, we now plot the response points as text.

Earth models with no degree1 terms but with degree2 terms were incorrectly labelled as intercept-only models. Fixed that.

Fixed incorrect printing of some messages when trace=-1.

Expansions to check.index for earth.

Added a vignette "Notes on the plotmo package".

Some more functions are now exported to allow earth::plotmor to easily get the model data

Some documentation touchups as usual.

Plotting of prediction or confidence levels is now more comprehensive. We now allow both prediction and confidence intervals to be plotted for those predict methods that support it on new data (currently only lm). The "se" argument is now deprecated and superseded by the "limit" argument (you will get a warning).

The "grid:" message in now printed for only multiple predictor models. Remember that you can always suppress this message in any case with trace=-1.

The xlim argument is now supported. Typically only useful if only one degree1 plot.

Basic support for the AMORE package has been provided. Thanks to Bernard Nolan and David Lorenz for this. But this has been commented out in the source code to avoid having "suggests(AMORE)" in the plotmo DESCRIPTION file. To use functions, search for AMORE in the plotmo source code, and cut and paste the commented-out code into your environmemt.

The default cex.response is now NULL (meaning automatic, was 1).

Minor other changes to fix formatting of captions etc.

You can now use trace=-1 to inhibit the "grid: " message.

Removed a call to .Internal(persp)

Fixed an minor incorrect message introduced in the previous release.

You can now specify variables by name in degree1 and degree2. Suppressed annoying "Warning: surface extends beyond the box". We no longer issue an incorrect err msg if data frame has an "AsIs" field.

Fixed an incorrect stop when trace>0 and x had no column names. We no longer print the plot index in the plot title when all1 or all2 specified but also degree1 and degree2. Added get.plotmo.default.type.fda Touchups to the documentation.

Removed hooks for the earth package (which are no longer necessary with earth 2.6-2). The file plotmo.methods.R was deleted.

Added ndiscrete arg (variables with a small number of levels are now plotted as "blocks", like factors). Added smooth.col and related args (plotmo can add a loess line). Made tweaks necessary because earth now imports this package. Added dvalue and npoints args. Added center arg (preliminary implementation). Added basic support for lars, nnet, and knn3 models. Jittering now works better. We now jitter response points for factors and discrete variables by default. plotmo is now faster: We cache the plot data to avoid calling predict twice for each plot For discrete vars and factors we only call predict for their original values ngrid1 is much smaller (ok to do that because of ndiscrete arg) Better error reporting for illegal args. Reduced the number of default colors (just grays and lightblue now). Out-of-range values in image plots are now plotted in blue. Fixed an issue where the wrong environment could be used. Better error reporting for unsupported models. Fixed handling of factors with non contiguous levels Modified test scripts to conform to R 2.13.0's way of printing numbers Numerous other document and code touch ups.

plotmo was printing degree1 graphs for all used earth predictors, not just those appearing in degree1 terms. Fixed that.

plotmo was not handling all1=TRUE correctly for earth models with factor predictors. Fixed that.

Depended on by earth.