📖 Read the Wiki pages to get started with the lidR package.

Read and display a las file

In R-fashion style the function plot, based on rgl, enables the user to display, rotate and zoom a point cloud. Because rgl has limited capabilities with respect to large datasets, we also made a package PointCloudViewer with greater display capabilities. 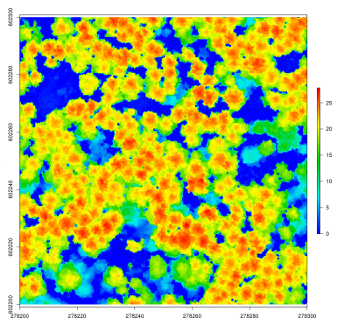 lidR has several algorithms from the literature to compute canopy height models either point-to-raster based or triangulation based. This allows testing and comparison of some methods that rely on a CHM, such as individual tree segmentation or the computation of a canopy roughness index.

Read and display a catalog of las files

lidR enables the user to manage, use and process a catalog of las files. The function catalog builds a LAScatalog object from a folder. The function plot displays this catalog on an interactive map using the mapview package (if installed).

From a LAScatalog object the user can (for example) extract some regions of interest (ROI) with lasclip. Using a catalog for the extraction of the ROI guarantees fast and memory-efficient clipping. LAScatalog objects allow many other manipulations that can be done with multicore processing, where possible.

The lastrees function has several algorithms from the literature for individual tree segmentation, based either on the digital canopy model or on the point-cloud. Each algorithm has been coded from the source article to be as close as possible to what was written in the peer-reviewed papers. Our goal is to make published algorithms usable, testable and comparable.

Most of the lidR functions can process seamlessly a set of tiles and return a continuous output. Users can create their own methods using the LAScatalog processing engine via the catalog_apply function. Among other features the engine takes advantage of point indexation with lax files, takes care of processing tiles with a buffer and allows for processing big files that do not fit in memory.

lidR has many other tools and is a continuously improved package. If it does not exist in lidR please ask us for a new feature, and depending on the feasibility we will be glad to implement your requested feature.

To install the package from github make sure you have a working development environment.

Why versions > 2.0 are incompatible with versions 1.x.y?

The lidR package versions 1 were mainly built upon "personal R scripts" I wrote 3 years ago. These scripts were written for my own use at a time when the lidR package was much smaller (both in term of code and users). The lidR package became a relatively large framework built on top of an unstructured base so it became impossible to develop it further. Many features and functions were missing because the way lidR was built did not allow them to be written. The new release (lidR version 2) breaks the former code to build a more robust, more consistent and more scalable framework that is intended and expected to continue for years without the need to break anything more in the future.

Old binaries can still be found here for 6 months:

Overview of the main visible changes

lidR as a GIS tool

lidR versions 1 was not a GIS tool. For example, rasterization functions such as grid_metrics() or grid_canopy() returned a data.frame. Tree tops extraction with tree_detection() also returned a data.frame. Tree segmentation with lastrees() accepted RasterLayer or data.frame as input in a very inconsistent way. Moreover, the CRS of the point cloud was useless and never propagated to the outputs because outputs were not spatial objects.

No longer any update by reference

Several lidR functions used to update objects by reference. In lidR versions 1 the user wrote: lasnormalize(las) instead of las2 <- lasnormalize(las1). This used to make sense in R < 3.1 but now the gain is no longer as relevant because R makes shallow copies instead of deep copies.

To simplfy, let's assume that we have a 1 GB data.frame that stores the point cloud. In R < 3.1 las2 was a copy of las1 i.e. las1 + las2 = 2GB . This is why we made functions that worked by reference that implied no copy at all. This was memory optimized but not common or traditional in R. The question of memory optimization is now less relevant since R >= 3.1. In the previous example las2 is no longer a deep copy of las1, but a shallow copy. Thus lidR now consistently uses the traditional syntax y <- f(x).

The frame of lidR versions 1 was designed at a time when there were fewer algorithms. The increasing number of algorithms led to inconsistent ways to dispatch algorithms. For example:

lidR version 2 comes with a flexible and scalable dispatch method that unifies all the former functions. For example, grid_canopy() is the only function to make a CHM. There is no longer the need for a second function grid_tincanopy(). grid_canopy() unifies the two functions by accepting as input an algorithm for a digital surface model:

This allows lidR to be extended with new algorithms without any restriction either in lidR or even from third-party tools. Also, how lidR functions are used is now more consistent across the package.

lidR versions 1 was designed to run algorithms on medium-sized point clouds loaded in memory but not to run algorithms over a set of files covering wide areas. In addition, lidR 1 had a poorly and inconsistently designed engine to process catalogs of las files. For example:

lidR version 2 comes with a powerful and scalable catalog processing engine. Almost all the lidR functions can be used seamlessly with either LAS or LAScatalog objects. The following chunks of code are now possible:

Other changes that are not directly visible

This version is dedicated to extending functions and processes to entire catalogs in a continuous way. Major changes are:

Report a bug at https://github.com/Jean-Romain/lidR/issues