tidycensus is an R package that allows users to interface with the US Census Bureau's decennial Census and five-year American Community APIs and return tidyverse-ready data frames, optionally with simple feature geometry included. Install from CRAN with the following command:

Want to learn how to use tidycensus? Take the DataCamp course Analyzing US Census Data in R! 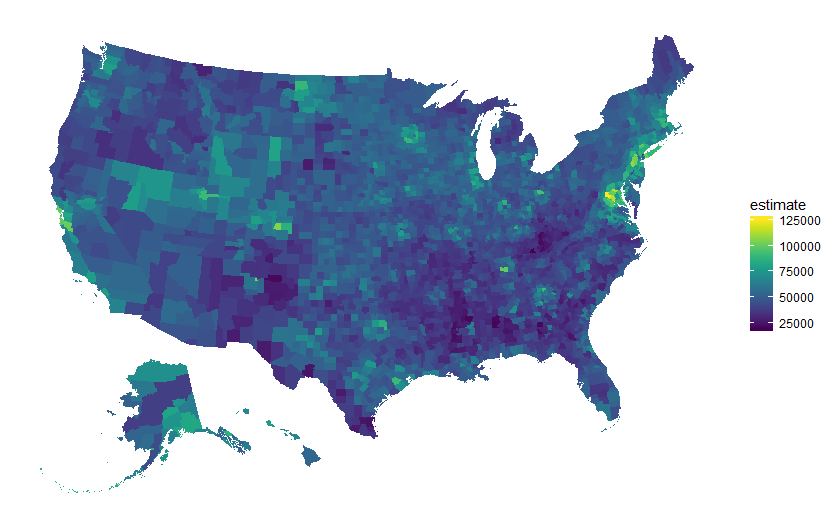 My work heavily involves the use of data from the US Census Bureau, and like many R users, I do most of my work within the tidyverse. Beyond this, the sf package now allows R users to work with spatial data in an integrated way with tidyverse tools, and updates to the tigris package provide access to Census boundary data as sf objects. Recently, I've found myself writing the same routines over and over to get Census data ready for use with tidyverse packages and sf. This motivated me to wrap these functions in a package and open-source in case other R users find them useful.

tidycensus is designed to help R users get Census data that is pre-prepared for exploration within the tidyverse, and optionally spatially with sf. To learn more about how the package works, I encourage you to read the following articles:

To keep up with on-going development of tidycensus and get even more examples of how to use the package, subscribe to my email list by clicking here (no spam, I promise!). You'll also get updates on the development of my upcoming book with CRC Press, Analyzing the US Census with R.

My development focus is on making the current datasets as accessible as possible; if you need other approaches or datasets, I recommend the censusapi and acs packages.

If you find this project useful, you can support package development in the following ways:

Report a bug at https://github.com/walkerke/tidycensus/issues