Potential outliers are identified for all combinations of a dataset's variables. O3 plots are described in Unwin(2019)

OutliersO3 is for visualising results of outlier analyses. Overview of Outliers (O3) plots show which cases are identified as potential outliers for different combinations of variables from a dataset.

You can compare sets of outliers identified by up to six different methods. You can also compare results for a single method at up to three different tolerance levels.

Install in the usual way

What outliers are there amongst the genuine banknotes in the Swiss banknote dataset?

Flury and Riedwyl introduced the famous banknote dataset in their excellent book on multivariate statistics. There are measurements on 100 genuine banknotes and on 100 counterfeit banknotes. Presumably the genuine notes should all be very similar. 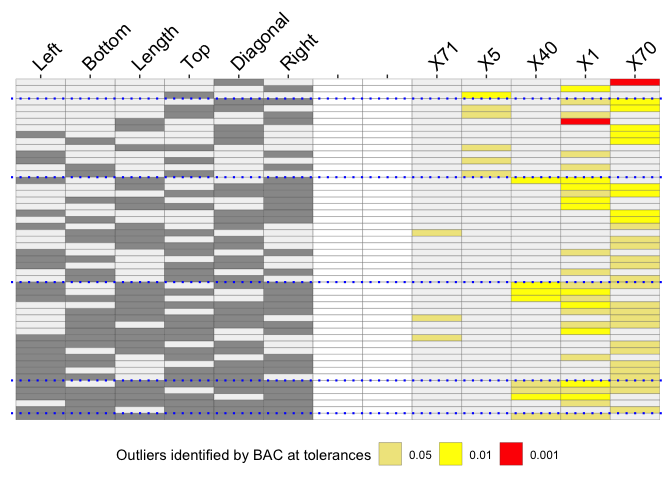 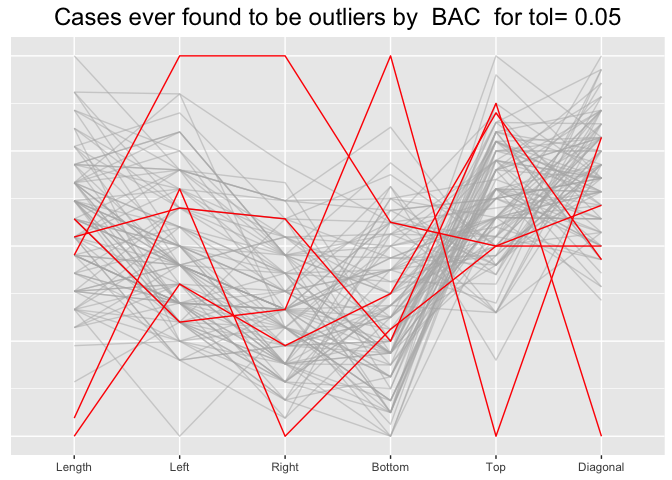 This plot also suggests that all five cases identified as potential outliers are relatively extreme on at least one of the six attributes.

There are more examples in the package vignettes.

The authors of the package cellWise have renamed their function DetectDeviatingCells DDC and this required a minor code change in OutliersO3 and amendments to help files.

(Thanks to anonymous referees and not-so-anonymous JCGS editors for suggesting some of these changes.)

Use mvBacon and covMcd for their respective 1-d outliers and not boxplot limits.

Added legends to O3 plots and no longer include plot titles.

There are now two white columns separating the left and right blocks of O3 plots.

Added the options sortVars (whether variables in an O3 plot are sorted or not) and coltxtsize (text size of column names) to O3plotT and O3plotM.

Corrected the index entries for the vignettes so that they are all different.

There are three major changes to the package.

Two further plots have been added, an O3 plot for more than two methods in which only case combinations identified by at least two outliers are displayed, and a parallel coordinate plot of outlier distances (when provided by methods) either by methods (O3plotM) or by combinations (O3plotT).

The method covMcd{robustbase} has been added as an optional method.

For an O3 plot with one method and more than one outlier level, you can enter the levels in the arguments tols and boxplotLimits in any order. (Thanks to Tae-Rae Kim for this suggestion.)

For an O3 plot with more than one method, you can enter the methods in any order.

If a dataset includes case identifiers, then these can be used as labels for the case columns in the O3 plot through the argument caseNames.

O3 plot rows are now sorted by numbers of outliers within size of variable combinations. (Thanks to Nina Wu for pointing out that this was not working as intended.)

The default colours in an O3 plot for comparing two methods have been changed to be more distinctive.

Colours can be specified using either colours or colors (or col) in O3plotColours.